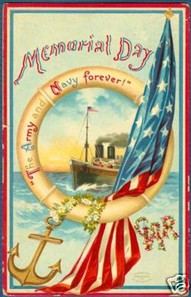 It is Memorial Day weekend. We hope all of you have a great weekend and take a little time to remember all the people that have gone before us.

We are selling alot of product at Then and Now up in Petoskey. This weekend is often one of their biggest sale weekends of the summer as everyone heads north for the first big holiday weekend of the summer.

We are planning on doing three shows this year. The two shows at the Fairgrounds in Petoskey and The Country Living show. So stay tuned for more details as we get into the summer. 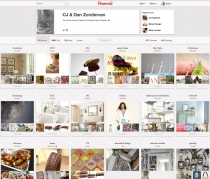 Interior Designers New Online Filing Cabinet, that is the title of an article written by Erika Fifelski in the new West Michigan Women  magazine about how I (& Dan) have been using Pinterest﻿ in our business. Dan & I are admitted addicted pinners, but it also is a vital part of the the business for both of us. As you will read in the article it is an online place to store ideas in general (rather than tearing them out of magazines), client specific ideas and selection as well as creative ideas of thing so make etc. It also is a huge way for us to follow trends and stay current. I am sure you are going to like this magazine it is full of good info. Look for more about us under "spaces" in the weeks and months to come. It is a free magazine so make sure to subscribe online and follow us on Pinterest, we would love to follow YOU too!
Posted by True North Interior Design & Antiques at 10:40 AM 1 comments 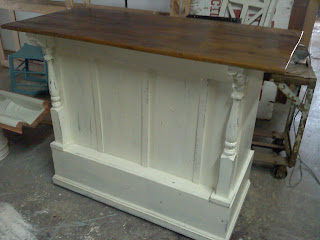 In the last couple of years I have built a number of furniture projects for stores that want help giving their interiors a vintage look. The latest project was a store counter(pictured above) that I made for a new store opening in Rockford, Michigan. The counter was made out of a vintage cabinet, old plank door, stairway spindles, and other misc. vintage trim. I usually finish the bottom of the counter with a distress painted finish and the top is usually done in a natural stained finish. 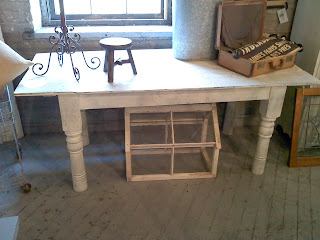 The all white harvest type table was made out of an old plank doors and vintage porch columns cut in half for the legs. This table is headed north and will be a display table in a retail store. 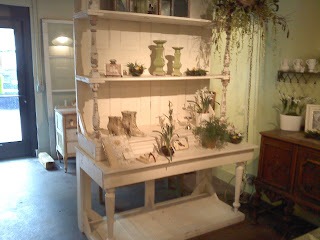 A couple of years ago I built the next two cabinets pictured for a business here in Grand Rapids. Both are made out of a variety of vintage wood parts. Vintage doors, old tongue and groove shelving, porch spindles, table legs, etc. were used in the construction.  Both were painted in a distressed white finish. 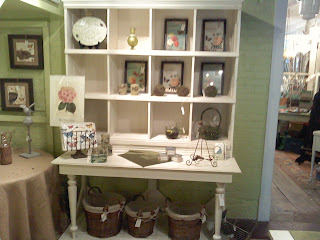 Many of my pieces can be found up north in stores up in Harbor Springs and Petoskey area. This has been a somewhat unexpected market for me but very delightful.  So if any of you reading this need store display fixtures or counters just email me we would be happy to accommodate any special needs. We even have been known to do delivery of finished pieces.

One final note to this post is that we are doing the Country Living show this year again in Columbus, Ohio. We love doing this show but it also means we will be very busy over the next few months. We will be making many things out of vintage parts and pieces and scouring antique shows and flea markets looking for wonderful product that we can begin to put aside for the show. Our space this year is 10 feet by 20 feet and we will be bringing our own tent. The tent needs to be white so if any of you have any leads on a good heavy tent let us know.
Posted by True North Interior Design & Antiques at 4:59 PM 0 comments 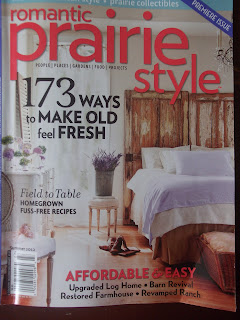 The other day I found another new and interesting magazine on the newsstand, Romantic Prairie Style. It appears to be an extension of a book by the same name that has been popular in the last year or so. The magazine and the book inspire us to enjoy the charm, beauty, and ingenuity of a simpler prairie farm lifestyle that encourages us to forget fussy furnishings, salvage vintage, repurpose with style, to celebrate the spirit, creativity and resourcefulness. I have looked at the magazine a number of times in the last 24 hours and each time I am inspired.
I have to tell you though any magazine that talks about prairie always gets my attention. I grew up in rural Minnesota about 100 miles west of Minneapolis/ St. Paul. It was an area of very flat land that was originally long grass prairie and is now very rich farm land. Much of this country was flat open spaces and big has a big sky feel.
Both of my grand parents immigrated from Europe and became farmers on that Minnesota prairie, My German Grandfather on my mother's side of the family(pictured below) had a fairly large farm which he call Evergreen Lane. There were two driveways that took you in to the farm and planted on both sides of the driveway were evergreens. Thus the name of the farm. The evergreens always seem abit out of place of that wind swept land which was largely devoid of trees except for the trees most farmers had trees planted on the north and west sides of the farm to provide a wind break from the winds that were cold and brought in numerous storms in the winter.
I never had a chance to get to know my Grandfather because he died two years before I was born. In many ways he and I are not at all alike based on what I know about him. But he did have a creative side that even to this day inspires me. He loved working with his hands and created many things that today we would call folk art. Maybe we could even call it prairie folk art. 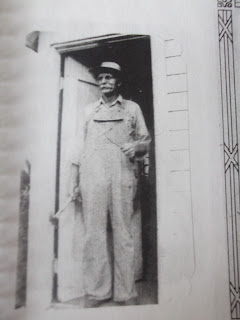 Many of his creations involved making toys for kids but he also made things like the miniature replica of his farm pictured below. 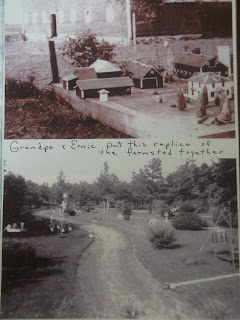 However, he really loved flowers and gardening and loved building things for the garden. Pictured above are many numerous items that dotted his yard on the farm. They included swings, planters make out of old farm equipment, and a concrete pond which held his gold fish in the summer months. He also made a lot of planters and ornaments out of concrete and broken glass. This is something that has long been on my list of things to try. 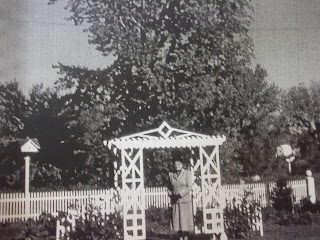 In the above picture is his garden at the rear of the property when he moved into town after retiring from farming. He built the bird houses, the fence which had poured concrete posts, and a wonderful trellis that my Grandmother is standing under. This also happens to be the trellis my parents were also married under. 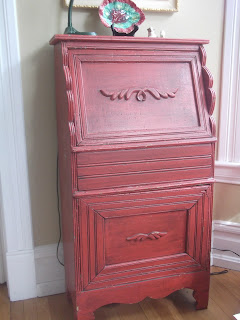 He even tried his hands at building furniture. The above desk is in my dining room and is still used by me two of three times a month. I also have an armoire that has a similar folksy feel to it. The furniture has a wonderful primitive quality about it. My mother was always apologetic about the fact that he used barn wood to build the furniture but I have always loved the primitive feel that both pieces have. I think they have a wonderful romantic prairie feel to them.
So see it is hard for me to not fall in love with the very notion of a romantic prairie style. A few years ago I went back to Minnesota with my camera and took a few pictures of what was left of my Grandfather's work and Evergreen Lane. I took the below picture of the concrete post standing in the backyard of what was his city garden. The pickets of the fence have long ago rotted but has you can see the post still stands proud. I am told that the person who purchased the house after my grandmother died moved the trellis and had it restored. I have long wanted to build that trellis as well(another item on my very long list of projects to do). 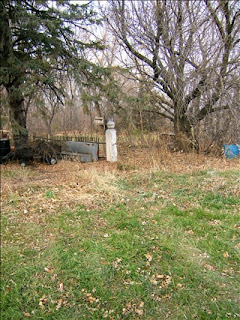 Evergreen Lane Farm is however gone. As many of the farms have become bigger there  is less need for all of the old farm places and often they are too far away from local cities for people to want to live in them. So they rot and decay. Many of them such as Evergreen Lane have been completely demolished by the farmers who own the land and turned back in to farm land because the land is so valuable. All that is left now are these two cottonwood trees planted by my grandfather that mark were the entrance to were the farm was. They are lone sentinels in this vast open landscape that was my grandfather's farm and was part of midwest prairie. 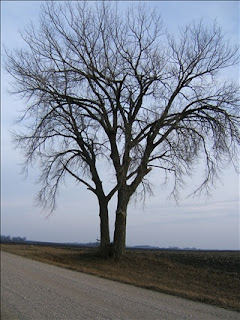